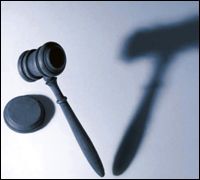 The Verdict: Hang Up
Don't Fall for Jury Duty Scam

The phone rings, you pick it up, and the caller identifies himself as anofficer of the court. He says you failed to report for jury duty and that a warrant is out for your arrest. You say you never received a notice. To clear it up, the caller says he'll need some information for "verification purposes"-your birth date, social security number, maybe even a credit card number.

This is when you should hang up the phone. It's a scam.

Jury scams have been around for years, but have seen a resurgence in recent months. Communities in more than a dozen states have issued public warnings about cold calls from people claiming to be court officials seeking personal information. As a rule, court officers never ask for confidential information over the phone; they generally correspond with prospective jurors via mail.

The scam's bold simplicity may be what makes it so effective. Facing the unexpected threat of arrest, victims are caught off guard and may be quick to part with some information to defuse the situation.

"They get you scared first," says a special agent in the Minneapolis field office who has heard the complaints. "They get people saying, 'Oh my gosh! I'm not a criminal. What's going on?'" That's when the scammer dangles a solution-a fine, payable by credit card, that will clear up the problem.

With enough information, scammers can assume your identity and empty your bank accounts.

"It seems like a very simple scam," the agent adds. The trick is putting people on the defensive, then reeling them back in with the promise of a clean slate. "It's kind of ingenious. It's social engineering."

In March, USA.gov, the federal government’s information website, posted details about jury scams in their Frequently Asked Questions area. The site reported scores of queries on the subject from website visitors and callers seeking information.

Protecting yourself is the key: Never give out personal information when you receive an unsolicited phone call.

The FBI address several scams on their website. Go to the URL below to read more on "SCAMS & SAFETY 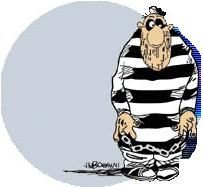 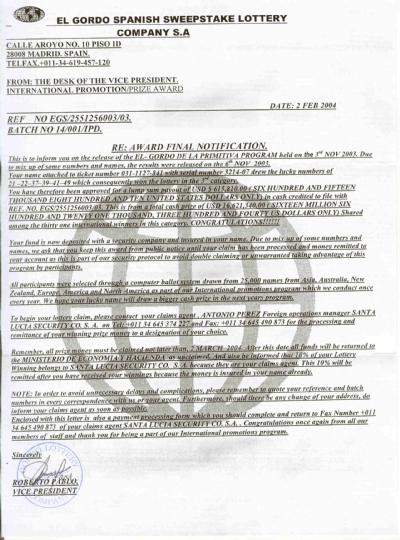 In recent weeks Pueblo has been the target of another lottery scam. This time the suspects are contacting victims through our mail and email systems claiming to be an international lottery company. One of the fictitious names being used by these bogus companies is El Gordo Spanish Sweepstake Lottery out of Madrid Spain. This company is sending letters to victims claiming there was a mix-up and their name has now appeared on a winning lottery ticket now making them eligible for a large sum of money. However, to claim their winnings they must pay a nominal fee up front or fill out a sheet with their personal bank account information on it and send it back to this company. If you or someone you know has received one of these fraudulent letters simply throw the letter away. Remember NEVER release any personal information about you or your bank on the phone or to any business you are not familiar with. If you would like to read more about these fraudulent lottery letters go to the Internet and type in El Gordo Lottery Scams.